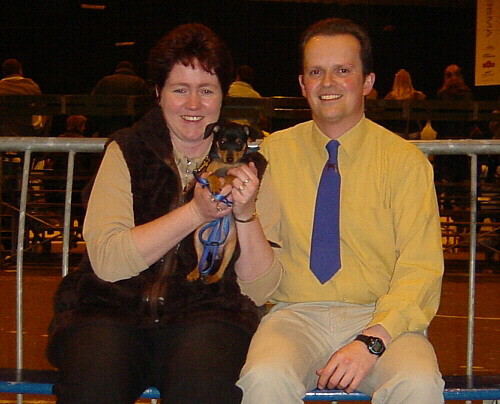 We are Bianca Smits and John de Vugt and live with our 6 Miniature Pinschers in Roosendaal, a city near the Belgian Border. John grew up with a MinPin and when his parents, after they lived without a dog for 5 years, were searching for another MinPin in 1999 they ended up with kennel "van Majori's Donk" owned by Mr. and Mrs. Timmers. They already admired some dogs of Mr. and Mrs. Timmers at the clubmatch of the local dog club in 1995 and were very impressed especially with the sweet characters of the dogs. So the choice where to get a dog was easily made. At the end of 1999 "Joey van Majori's Donk" arrived. We also loved this adorable dog and as natural born dog lovers it was a sure thing that we would get a dog ourselves. The choice of breed was obvious as the MinPin is the ultimate dog for John and I, Bianca, have always liked them too.

Eventually we were on the waiting list for a male out of the same combination as "Joey". When the litter was born in 2001 there appeared to be only females so we were very disappointed. Around that same time another litter was born at kennel "van Majori's Donk" from which 2 males were still available. We had the choice to wait or to pick a male out of this mixed, partly red and partly black&tan, litter. We chose for the latter and although we originally wanted a red male, we went for the black&tan male called Wesley. And what a great decision we made when we look back. What a dog! What a superb character!

Mrs. Timmers said that Wesley was a beautiful male and that we surely had to enter him for a dog show. This was already my intention as I had showed my parents' West Highland White Terriërs for the last couple of years. John eventually didn't like shows but he didn't mind me showing Wesley every now and then. After we went to a dog show together he enjoyed it so much however that he was sold immediately. Every now and then became often and it appeared that a new hobby was born.

In 2002 Bjorn van Majori's Donk arrived and of course he was also shown and at the end of 2004 our third dog Gabber van Majori's Donk arrived. When we look back at the last couple of years we can safely say that we have 3 very successful dogs and that we owe this all to the unselfishness of Mr. and Mrs. Timmers as they don't mind giving their best dogs away. The last years we became close friends and always go to shows together.

In March 2006 we imported our first female from Finland. A very special female because she is the daughter of Wesley and she was born out of a true dream combination, at least that's what we think. In our opinion Wesley came very close to being the perfect MinPin. He was compact and of very short build with impressive show temperament and a fierce but still very sweet character. He was also a very balanced dog. When Wesley and I were in Finland in 2005 for a dog show we were the guests of kennel "Aurra Sing". I had the privilege to meet Santra (Official name: A'Dreams Black Enigma) who looked so much like Wesley, character included, that they could have been twins. Marika, owner of the kennel, took the effort to fly all the way to Holland to mate her magnificent female with Wesley. This resulted in a litter of 3 females and we were extremely lucky to get the female called "Whisper". We are forever grateful to you Marika.

In 2006 family Timmers offered me the opportunity to become co-owner of kennel “van Majori’s Donk". Under this kennel name I have bred 2 litters. In 2014 I decided to apply for my own kennel name and in September 2014 I received the approval from the FCI and the Dutch Kennel Club. Our kennel name is “ROSTELLEY’S ANGELS”. How did we come up with this name? Whisper is our first female and if we would not have bought her we most likely would not have had any females up to this day and would not have started to breed MinPins. So Whisper is very special to us. Whisper's nickname happens to be “Rostelli”. To also make Wesley part of the kennel name, I changed the ending of the name Rostelli into Rostelley and that's how the name Rostelley’s Angels was made up.

We are proud to say that the dogs are the centre of our lives. We consider our dogs as family members and we take them everywhere with us. We always go on vacation to Austria because it's easy to take the dogs with us there and we can make sure they have a nice (hiking) vacation themselves. In the meantime since 2006 I also became the secretary of the breed club and editor of the club magazine that appears 4 times a year. Showing our dogs in our country and abroad has become a true passion. It's unbelievable that a dog hobby can result in so many contacts throughout the years.

The close friendship between Marika (kennel Aurra Sing) en me resulted in 2009 into a unique co-ownership. Together with her I bought the female "Semper Ante Forget-me-Not" (Viva). Due to several changes in future plans of Marika we decided in 2012 in good agreement that Viva will no longer be co-owned by Marika.

End 2011 a long cherished wish came true; we had our first own litter. Whisper gave birth to 3 beautiful puppies and she herself appeared to be a magnificent mother. From this litter we kept 1 female for ourselves (Wendy) and 1 female (Frida) has been placed in co-ownership with Satu Peltoniemi. THANK YOU Satu for making this possible for us!
In 2013 we had our 2nd litter and this is a very special litter since we used 2 of our own dogs; Viva and Gabber. This resulted in 2 female puppies, one red and one black/tan. We decided to keep the red girl (Veera). Both litters were born under the kennel name “van Majori’s Donk". From now on all future litters will be born under our own kennel name.

After Wesley passed away in 2009 I had a silent wish to have a new fearless brave black/tan boy in our group. For a long time this seamed impossible since it's not very confinient to have both males and females in you house during periods of heat and so we kind of decided to only have females in our home. In July 2018 a saw a picture of a b/t puppyboy on social media and I fell instantly in love. When I looked at his pedigree it appeared to be a great-grandson of "our" Wesley and I just knew I had to have him. And so a month later we introduced "Santa Julf Nokaut" (Misha) in our home.

We also like to thank all of the co-owners of our dogs for giving us the oportunity to preserve this lovely breed by co-operate with all of you.

This website has been online since 2002 and was originally named "Wesley van Majori's Donk" as Wesley happened to be our only dog at that time. Untill 2014 the name of the website never changed as a tribute to Wesley, the dog that started it all.

Now that we have our own kennel the name of the website has been changed to “Rostelley’s Angels Miniature Pinscher Kennel”. Wesley has had a huge impact on our lives and indirectly he is responsible for me having my own kennel. He is and will always be in our minds......

We wish you a lot of enjoyment browsing through our site.